Posted on April 20, 2021 by cafemamapdx under things to do in portland

What’s going on around Portland?

Let’s start with a day in the middle of spring, shall we? Imagine neighborhoods filled with flowering trees, Portlanders gardening and walking their dogs to coffee early in the morning, sitting in central grassy spaces in the middle of the day with blankets and bikes strewn about, gossiping or sketching in their journals. As the afternoon wears on, it’s time for a run along the waterfront, a bike ride across the Tilikum Crossing, or a walk to get ice cream. Early evening is for sitting on patios at breweries, picking up sushi burritos at food cart pods, or hiking in some of the Eastside parks. You’ll want to stroll or bike somewhere to watch the sunset: Mt. Tabor maybe, or if you’re energetic a pretty spot on the slopes of Mt. Hood. Maybe pick up some poetry or a good book of essays to chat about on a front porch or backyard swing somewhere, with a blanket as the air gets cool.

Our tour guests ask us all the time: what must I do in Portland? Of course, it changes by the seasons. Here is what you must do this month.

Cherry blossom profusions happen all over the world, and ours come to us in a roundabout way from Japan and our Japanese immigrants during the early 1900s. The Japanese American Historical Plaza, designed by Robert Murase, is meant to commemorate the experience of immigrants, most of who came to the U.S. and Portland from the 1890s to the 1900s, and who lived in the neighborhood we now call Old Town / Chinatown. In the first four decades of the 1900s, it was Nihonmachi, Japantown. World War II era sentiment was not kind to these people living among us — first as our friends and neighbors, then as objects of suspicion and mistrust. We sent thousands to internment camps in severe climates, only allowing the return long after the war was over. They returned to nothing. The cherry trees are part of a monument meant to remember what we have done so we don’t repeat it. Walk under the blossoms, read the poetry about the people who lived in this neighborhood, and remember how life continues to repeat its cycles of beauty, newness, fullness, ripeness and death — and think about what we can do to change our own part in these cycles.

Only a 45 minute drive from Portland, the Wooden Shoe Tulip Festival in Woodbury brings flower-lovers and Instagrammers from all over the country each year. Tickets are required, but are inexpensive for the privilege of wandering through acres and acres of red, yellow and orange tulips composing the perfect shot. There are plenty of tulips to take home, too, and if you want the ultimate tulip experience that might be a hot air balloon ride at sunrise. Tickets for hot air balloons sell out fast, however, so the early bird gets the best social media posts!

Order a cappuccino from the people who roasted the beans

Portland’s craft coffee roasting scene is one of the best in the world. We’ve chatted up roasters only to learn they come from coffee-producing parts of the world and have come to Portland — usually the inner SE — to learn the craft and work with people revered throughout the industry. Stumptown Coffee (now owned by Peet’s) and its founder, Duane Sorenson, are credited with beginning the wave of craft roasting that spread through the country in the late 1990s and early 2000s.

We have a long list of favorite coffee shops, but we’d start with Upper Left Coffee Roasters, for its delicious coffee, outrageously good breakfast sandwiches, and the proximity of its outdoor seating area to the roasting operation. Order a cappuccino or just a classic drip coffee, sit on one of the outside tables, and watch the bicyclists commute by.

Ride a bike slowly through the neighborhoods and gardens 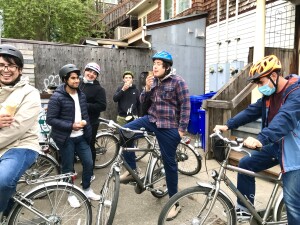 We’re not the only ones to suggest the best way to learn how to navigate Portland’s streets is to take a bike tour — preferably one that skips downtown traffic and focuses most of its time riding through the neighborhoods. You’ll feel more like a local, and get the perspective of the people who ride around the city every day. You’ll also learn tips and tricks of Portland’s bicycling infrastructure that even many Portlanders don’t know — where to look for the blue lights that indicate you have been seen by the traffic light sensors, for instance, and what a Copenhagen turn is. Also, your tour guide will probably work in a few of the other items from the must-do list (doughnuts, ice cream, and riding across bridges are all probabilities!).

Try a doughnut other than Voodoo

There are many bitter arguments among Portlanders, and the doughnut argument may not reach the level of angry divides. However, you can spark many a debate by asking which doughnut is best. (Could they all be right?) Leading contenders for Best Doughnut in Portland: Blue Star (culinary style pastries with unusual flavor combinations like Blueberry Basil and Raspberry Rosemary Old Fashioned, only open Thursday through Sunday currently), Delicious Donuts (just like it says: very good donuts, made with love by the family who runs the business. Open at 5 a.m., show up early for the fantastic apple fritters), and Pip’s (very small round doughnuts made to order; five regular varieties and a seasonal one are complemented by delicious chai selections. Open 8 a.m. to 2 p.m.; they will have a line, especially on weekends.)

Eat dinner out at the neighborhood food carts

In Portland, the street food vendors called “food trucks” in other cities are called “carts,” because they aren’t very mobile. While many of them technically can move, should someone have the right truck to haul them, others are so loosely mobile that they were literally built in place and probably won’t move for a decade or more. The food carts downtown gained fame during the height of Food Network travel shows, but a few years ago the biggest pod was scattered for the slow building of a new Ritz-Carlton hotel. It’s not the end of the world; the food carts in the neighborhoods were always a more pleasant experience. Try favorites in NW Portland if you’re staying near Forest Park or the Alphabet District: the Nob Hill Food Carts; or head to the SE for one of a dozen or so pods, like the original Cartopia, Scout PDX, or the (eye-rollingly named but still amazing) Hawthorne Asylum.